Alexander Bucciarati (lvl 2 rogue)
A man with a boat and a mission. He tells everyone about one but not the other.

Giro Beanna (lvl 2 barbarian)
A huge mischia player made even angrier by the loss of his mother to a magical beast attack. Carries a wooden chest on his back. 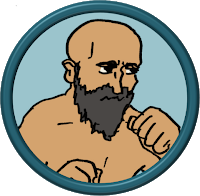 Manius (level 2 barbarian, having changed between sessions)
Alexander’s crewman, a large former pit fighter with all the wits of one. 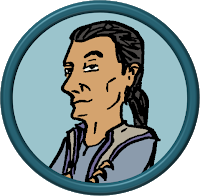 Salazar Caltata (lvl 2 rogue)
The scrawny fourth son of a nobleman. Good at hiding in a crowd. A snitch and a sneak. 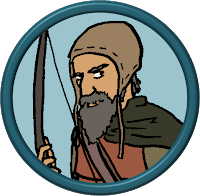 Vero Anzano (lvl 2 ranger)
An old hunter with a mysterious past. Swamped under an enormous bear cloak.
Player Absence:
Arabella Volhollen (lvl 2 fighter) – an archer with societal ambitions. Highly suspicious of and condescending towards pretty much everybody.
Recap:
We find our heroes sailing downriver from Langarica with a battered, unconscious body at the bottom of their boat, with some battered, mostly conscious bodies of their own. With a busy working week and an unwell wife, this was a largely prep-less session, and as such my first proper reliance upon random tables.
Key moments of the session: